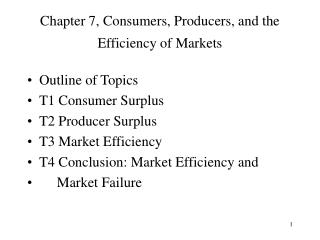 Chapter 7, Consumers, Producers, and the Efficiency of Markets

Chapter 7, Consumers, Producers, and the Efficiency of Markets

Chapter 7 - . efficiency and exchange. the domain of markets. markets are usually a good way to organize economic

Efficiency and Exchange - . market equilibrium and efficiency. what do you think? are markets always efficient and

Parts of Chapters 5 and 9 Consumer Surplus, Producer Surplus and Welfare Measurement - . 5.1 consumer welfare. how much

Consumer Surplus - . how many rectangles do you see here? 3, i hope. there is a, b, and a+b. some of what follows will

Unpleasant Facts About Digital Marketing - Digital marketing works for some brands but not others. some consumers are not