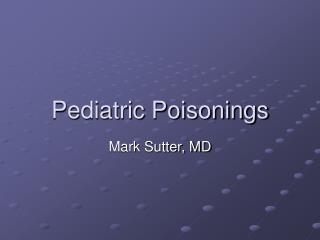 Chapter 35 lesson 2 Poisonings - . poisons. 1 and 2 million poisonings occur in the united states every year ½ of

Fumigant Poisonings and PPE - &quot;it is not my contention that chemicals never be used. i do contend that we have

Hemodialysis and Hemofiltration in Pediatrics: An Approach to Intoxication - . karen papez md university of michigan