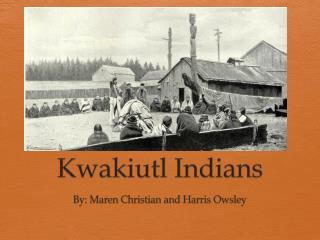 The Kwakiutl Indians - . f ood. the kwakiutl ate fish, hunted deer. they didn’t grow anything. the woman had a part and

Kwakiutl - . stephen, dakota and trey. about kwakiutl. the kwakiutl lived along the northwest coast of north

The Hopi And Kwakiutl - . by:vipisha. the hopi and kwakiutl food. the hopi grew mainly crops. they grew corn, beans,

INDIANS - . the tonkawan indians of texas. the name tonkawa is from the waco term tonkaweya, meaning &quot;they all

By Ethan and Sarah kwakiutl - . art. the kwakiutl were most famous for their masks and totem poles. totem pole’s a

George Hunt Jr. Kwakiutl Chief - . what is a mask?. something that covers the face darth vader and spiderman wear a

Comanche Indians - . bygage,keenan , markaythia. homes. the comanche indians were once part of the northern shoshone