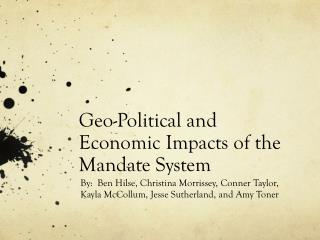 Geo-Political and Economic Impacts of the Mandate System Geo-Political and Economic Impacts of the Mandate System. By: Ben Hilse, Christina Morrissey, Conner Taylor, Kayla McCollum, Jesse Sutherland, and Amy Toner. What is a Mandate? . Established by Article 22 of the League of Nations Covenant June 28, 1919

Geo-Political and Economic Impacts of the Mandate System

Background to the French Revolution, its dynamics and introduction to its international politics: - . the “regime” or

The geopolitical and economic impact of the treaties on Europe - . ashley thrasher. the treaty of versailles?. the treaty

Political Divisions During the Vietnam War - . setting the scene- two of the sides. side 1- increase the war effort to

CAN THE UNITED STATES BE INDEPENDENT OF MIDDLE EAST OIL? - . by ibrahim m. oweiss professor of economics georgetown

Subject 1 Study Guide - . ib 20 th century world history topics. 1. what were the aims of the participants and