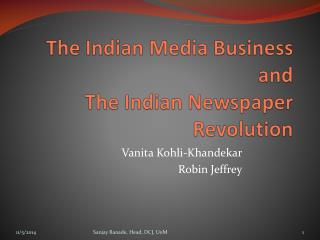 The Indian Media Business and The Indian Newspaper Revolution The Indian Media Business and The Indian Newspaper Revolution. Vanita Kohli-Khandekar Robin Jeffrey. Why Media Matters. Investors have poured in over Rs 20 billion into the Indian media and entertainment (M&E) industry over 2004 and 2005.

The Indian Media Business and The Indian Newspaper Revolution

Latest Indian Fashion Trends You Should Know - There are huge followers of indian fashion trends all over the world.

Top 3 Indian Tea Companies - A sip of tea relaxes the human mind like no other beverage does. tea is the favourite drink

Get real Indian Twitter followers - Www.indianlikes.com is an indian based promotion company. indianlikes is an

The Indian Removal Act of 1830 - . there's a trail of tears flowing from our homeland washing out the years drowning out

Creating a Dynamic Media Environment: The Business of News - Conference on media development in myanmar organized by the

Why Indian Importer Data is considered the success key for every active Indian importer? - Every indian trader who is in