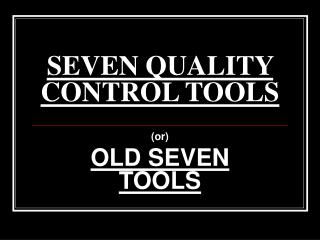 Chapter 7 Quality Tools - . which tool is best?. tools can serve as the backbone for virtually any type of quality

Quality Control - . quality control (qc). q uality control, focuses on the end result, such as testing a sample of items

Quality assurance in laboratories - . quality control. may 2007. learning objectives. at the end of the presentation,