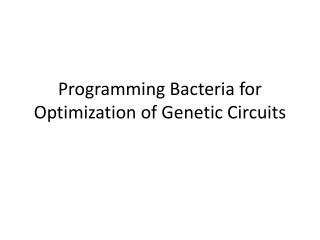 Programming Bacteria for Optimization of Genetic Circuits. Principles – Math Problems. Computation of solutions to Math Problems such as NP complete problems Bacterial computers We can encode these math problems in biological terms and solve prototype versions of them Genetic Algorithm for Parameter Optimization - . objective: to implement a genetic algorithm into myspice to allow

GENETIC PROGRAMMING - . the challenge. &quot;how can computers learn to solve problems without being explicitly

Genetic Programming - . genetic programming (gp) is an automated method for creating a working computer program from a

AstrologyÂ can help you solve problems about Love: - In this world there is no person, who can escape from