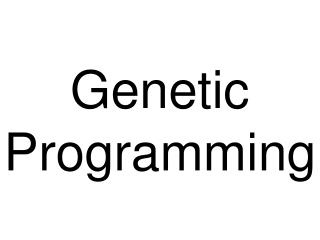 Genetic Programming. Genetic Algorithms. 1. Randomly initialize a population of chromosomes. 2. While the terminating criteria have not been satisfied: a. Evaluate the fitness of each chromosome:

Integer Linear Programming - . introduction. when one or more variables in an lp problem must assume an integer value we

Coding vs. Programming - . from http://thinkaround.blogspot.com/2006/01/coding-vs-programming.html coding is about how

Genetic Algorithms - . an algorithm is a set of instructions that is repeated to solve a problem. a genetic algorithm

Genetic and Environmental Influences on Personality - . major points. many individual differences in personality are