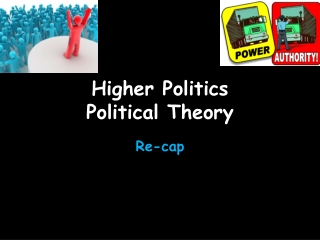 Higher Politics Political Theory. Re-cap. As a group you will be competing in a team quiz! The winner s will receive a prize!! This is based upon the Power, Authority, Legitimacy unit that we started before summer!. Power, Authority, legitimacy quiz!!. /9. Define the term ‘power’ 1 mark