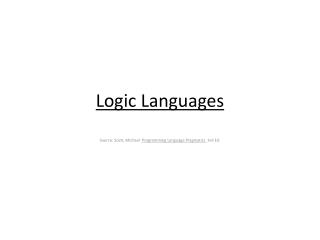 G22.2110 Programming Languages - . t he main themes of programming language design and use: model of computation

CLASSIFICATION OF PROGRAMMING LANGUAGES - . to facilitate discussion on any subject it is convenient to group together

Lecture 26: Introduction to Logic Programming with Prolog - The university of north carolina at chapel hill. lecture 26: