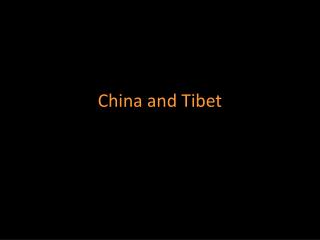 Motorcycle Tours in Thailand, Laos, Burma, Cambodia & China (Tibet) - The company is based in chiang mai and was

China vs. Tibet and Taiwan - . by: kevin bartok and alex kolesky. tibet. what is tibet?. it is a very religious buddhist

Qing China Plus Korea, Ming China and Tibet - . january 16, 2014. review. what was the primary written language in korea

Zen and Tibet By - Kelvin thompson. origins of

Welcome to Tibet - A look at daily life in tibet autonomous