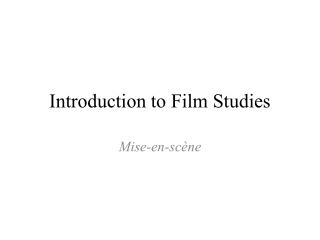 Introduction to Film Studies. Mise-en-scène. Framing. How to frame a frame ANGLE (of framing) In what angle a frame is composed: from which angle the subject is filmed. Of a wide range of angles, three more common angles STRAIGHT-ON, HIGH and LOW ANGLES. Framing.

Introduction to Film - . filmmaking as art and criticism. mise-en-sc é ne. from the french, it was originally a stage

Film Genres - . introduction to film studies. the western. western film is a genre telling stories set primarily in the

Introduction to Film - . screenplay writing the hero’s journey. story structure: the monomyth. in “the hero with a