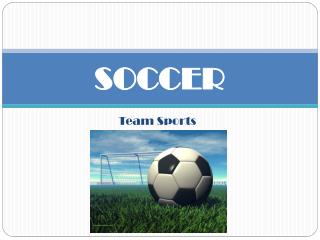 SOCCER. Team Sports . HISTORY. More than 240 million people around the world play soccer regularly. Records trace the history of soccer back more than 2,000 years ago to ancient China. Greece, Rome and parts of Central America also claim to have started the sport. Soccer - . how is it played. how to play what is the rules how many players are day in field. soccer rules –

Soccer - . by ; irving flores and elmer

Soccer - . ms. wallace 7 th grade p.e. what do you think of when you read this quote?. soccer: soccer is today’s most

SOCCER - . by alec logeman. early versions of the game first started about 3000 years ago. one of the earliest forms

Soccer - . history and rules. soccer’s beginnings. the origin of soccer can be found in every corner of geography

Soccer - . by: matthew gillis. origin. soccer originated in many parts of the world, appearing in ancient rome and greece

Soccer - . it’s my dream, i’ve played it my whole life and will continue to play until i can play no more. speed

Soccer - . by a nnaliese zmegac. what is soccer. soccer is a sport you have to gain control of the ball when you have the

soccer - . is a beautiful sport. it is played world wide. connects people. many people play it. i love it. times change.