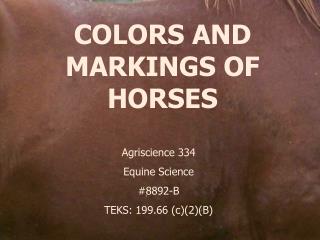 COLORS AND MARKINGS OF HORSES COLORS AND MARKINGS OF HORSES

The colors of Holi - The hindu festival of holi, also known as the festival of colors, heralds the beginning of

Hats and horses - Royals, races and headwear at the royal

Colors I Like (in this presentation) - Anti-fraud and the internal audit function proactive measures for finding fraud,

Chapter 7 - Lab - . the skeletal system: the axial skeleton. i. bone surface markings a. depressions and openings 1.

Genetic Selection of Horses - . introduction. genetics are not as utilized in the horse industry as in livestock species

Breeds of Horses - Horse colors horse colors continued how tall is a horse? the height of a horse is expressed in “