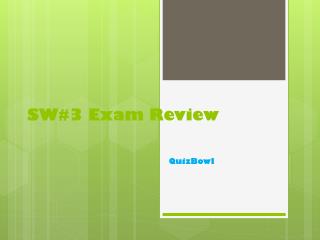 Surface Modeling in SW - . starting with a sketch, you can create a surface using extrude, revolve, loft, boundary

Regression with a Binary Dependent Variable (SW Ch. 9) - . so far the dependent variable ( y ) has been continuous:

Early Societies in SW Asia and the Indo-European migration - . ch. 2. the quest for order. mesopotamia: “the land

Physical Geography of SW Asia - . what are the major physical features of southwest asia, and where are they located?

Is there a systematic way to assess regression studies? (SW Chapter 9) - . a framework for assessing statistical