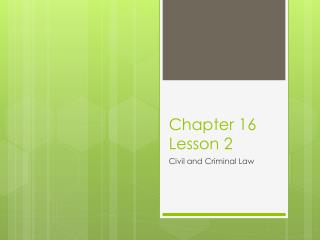 Chapter 16 Lesson 2. Civil and Criminal Law. Crime and Punishment. A crime is any act that harms people or society and that breaks a criminal law. Examples include shoplifting, stealing a car, and murder are crimes. Each state has a penal code . Chapter 4 - . spain builds an empire. lesson 1: the voyages of columbus. columbus and the taino. on the island of