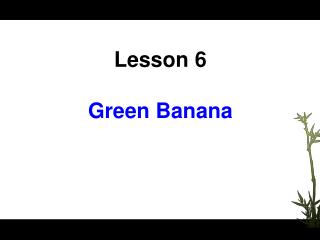 Lesson 6 - . translating the following sentences into chinese. 1. his very appearance at any affair proclaims it a

Lesson 6 - . the bunsen burner. by the end of the lesson all students should be able to: decide how to light a bunsen

Lesson 6 - . the pure principle of flourishing. objectives. participants will learn: how to use and interpret the pure

LESSON 6 - . class service project: determine who will receive your gift and what you might do. vocabulary review. what

Lesson 6 - . marxist perspectives of crime and deviance. identify and define why marxist see crime as inevitable in

Lesson 6 - . e-strategies and plans. what is a small business entrepreneur?. entrepreneur n. a business man or woman of