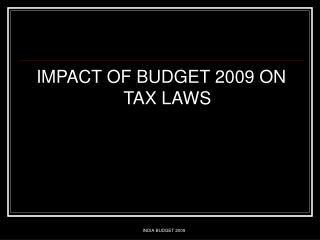 IMPACT OF BUDGET 2009 ON TAX LAWS. DREAM OF FINANCE MINISTER. To make tax collectors are like honey bees collecting nectar from the flowers without disturbing them, but spreading their pollen so that all flowers can thrive and bear fruit. . NEW STEPS TAKEN IN THIS DIRECTION.

FY 2009 Budget Preparation - . by budget office staff. microsoft excel must be installed in your computer prior to start WELCOME TO THE 2009-10 BUDGET HEARING AND ANNUAL MEETING OF THE SCHOOL DISTRICT OF - South milwaukee. the 2009-10 school