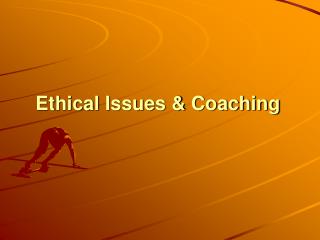 Ethical Issues & Coaching. OBJECTIVES. To define morals & ethics To examine some ethical issues & to consider that they are often complex & context specific To investigate areas where problems with ethics commonly exist KNR 205: Scientific Principles of Coaching - . introduction. general course stuff. this is a new course...first for me,