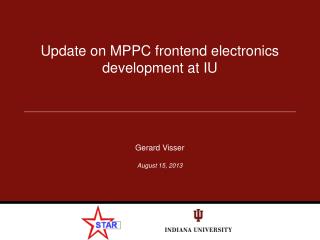 Update on MPPC f rontend electronics development at IU. Gerard Visser. The setup. blue LED. The preamp. It is AC coupled here for prototyping convenience, but the real board will be DC coupled and feed each MPPC with an independent bias supply, as previously discussed.

Tyco Electronics Supplier Guide to Material Disclosure - . presentation overview. in this presentation, we will: provide

Molecular Electronics - . prophecies of the future of technology are risky!! for example :. “i think there is a world

ELECTRONICS - . body builders. electric/electronics connection between euro 6 vehicle and body. in this section we give