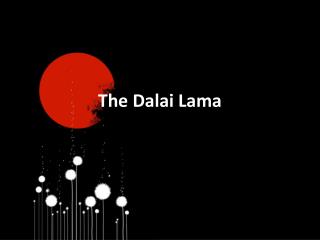 The Dalai Lama. The First Dalai Lama. Gedun Drupa, was born in 1391 in central Tibet His parents were Gonpo Dorjee and Jomo Namkha Kyi His given name was Pema Dorjee He founded theTashi Lhunpo monastery Wrote more than 8 books Spread Buddhism throughout Tibet. Dalai Lama - . dalai lama is the head monk of tibetan buddhism and traditionally has been responsible for the governing

Dalai Lama - . the dalai lama is the spiritual leader of the tibetan people . what belief system/philosophy/background

The Dalai Lama - . who is the dalai lama?. born july 6, 1935- tenzin gyatso 14 th reincarnation of the bodhisattva of

Co-meditating with the Dalai Lama and Lama Surya Das - Let go and release your constricted self; merge and dissolve with