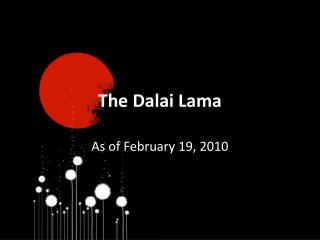 The Dalai Lama - . the first dalai lama. gedun drupa, was born in 1391 in central tibet his parents were gonpo dorjee and

Dalai Lama - . dalai lama is the head monk of tibetan buddhism and traditionally has been responsible for the governing

Dalai Lama - . the dalai lama is the spiritual leader of the tibetan people . what belief system/philosophy/background

The Dalai Lama - . who is the dalai lama?. born july 6, 1935- tenzin gyatso 14 th reincarnation of the bodhisattva of

Co-meditating with the Dalai Lama and Lama Surya Das - Let go and release your constricted self; merge and dissolve with

Remember that silence is sometimes the best answer. Dalai Lama, 2001 - When you talk, you repeat what you already know;

These Quotes By Dalai Lama Are Life Lessons - Dalai lama, one of the most influential people on this earth, has given us