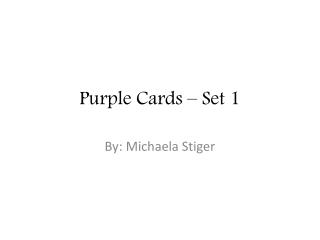 Purple Cards – Set 1. By: Michaela Stiger . Reform and Culture. This unit addresses the cultural aspects of the United States history during the 19 th century.

Warm Up: Mendeleev’s Card Game - Work with a partner. use the scissors to cut the 20 cards from the sheet on your

Week 23 - . monday, 3/9. daily math problem 1. each time adam walks home from school, he stops at the store and purchases

600-1450 Timeline Illustrations - . print six slides to a page. cut out pictures and attach to dated and identified 3x5

Credit Cards - . what you need to know. © consumer action 2010 . purpose of training. most people have credit cards —