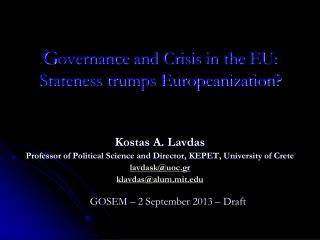 G overnance and Crisis in the EU: Stateness trumps Europeanization? G overnance and Crisis in the EU: Stateness trumps Europeanization?. Kostas A. Lavdas Professor of Political Science and Director, KEPET, University of Crete lavdask@uoc.gr klavdas@alum.mit.edu. GOSEM – 2 September 2013 – Draft . I. In lieu of an Introduction .

G overnance and Crisis in the EU: Stateness trumps Europeanization?

How Macroeconomics has evolved Before and After the Global Crisis - . by professor assaf razin tel aviv university and

Crisis &amp; Emergency Risk Communication by Leaders for Leaders - . communicating in a crisis is different . in a