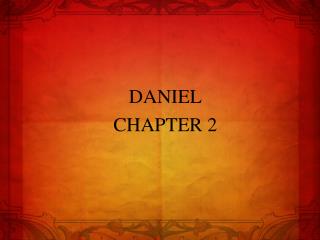 Daniel 2 - Understanding god’s script. daniel 2 31  “you looked, o king, and there before you stood a large

Daniel Lesson 2 - . daniel in the critic’s den. the veracity and authenticity of the book of daniel has been under

DANIEL CHAPTER TWO - . nebachadnezzar’s first dream “a view of the future?. read: daniel 2:1-6. 1 in the second