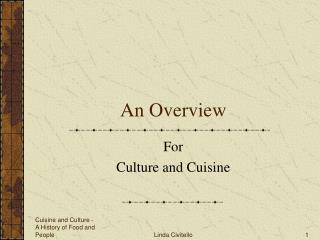 An Overview. For Culture and Cuisine. Question? If you were without electricity today what would you be without: Make a list and we will discuss your answers. If you were without water for 2-4 day period what could happen?. Cuisine and Culture - Intro . Taste is taught- DegreeWorks Scribe Overview - . agenda – what are we doing?. brief overview of what we will be doing touch on four

Strategic Analysis of PepsiCo - Introduction. methodsareas of concerngrowth opportunities and