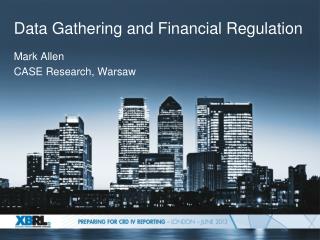 Data Gathering and Financial Regulation. Mark Allen CASE Research, Warsaw. The financial crisis has been immensely expensive. Cost of the financial crisis ( percent of GDP , 2008-11). * Change in percentage points, 2007-2010. The crisis was primarily a failure of regulation. GDPR COMPLIANCE â€“ DO YOU NEED A PRIVACY AUDIT? - The companies and smes we work with in london and elsewhere know

A Game of Shadows: Why Does the EU Attempt to Regulate Shadow Banking while Canada Does Not? - . sebastien labrecque

The Causes and Consequences of the Financial Crisis - . raghuram rajan chicago booth school of business. outline. the

A New approach to the comparative study of US AND EUROPEAN reGULATORY ReGIMES - . brendon swedlow department of political Data Gathering Procedures - . two dimensions on which we can distinguish data gathering procedures the degree of contact

When gathering data how do we get the best results? - . population —a group of people or objects that we want to get