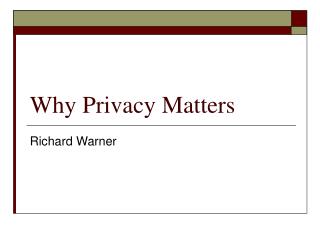 Why Privacy Matters. Richard Warner. Privacy and Government. Political philosophy has, for the last three hundred years, emphasized the critical role of privacy protections in limiting the power of the state. Why Online Privacy Matters - What can happen to my information once it has been breached? data is the most expensive

Why Information Matters - . this event is part of the quality use of caresearch project. information for consumers.

WHY PUNCTUATION MATTERS - . tuesday, 07 january 2020. let’s start with maths…. please attempt to sort out these

Why Insurance Matters - . community buildings louise currie. general guidance. it is essential to remember that as

Why Certification Matters - . certified nurses have taken the extra step to validate their specialized knowledge and

Why Rebranding Matters - . our brand is arguably our most important asset. what is a professional services brand? our

Why Friendship Matters - Friendship matters as they help us smile and laugh, and persist to be by your side no matter

Why Telemedicine Matters? - Why telemedicine matters? how clinicians, hospitals, and physicians can benefit from the

Why Theory Matters - Jackie green. why theory matters. “there is nothing so practical as a good theory.” (kurt