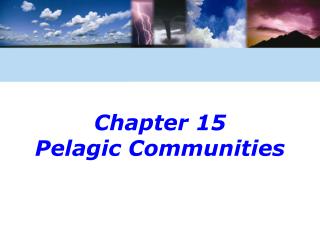 Chapter 15 Pelagic Communities. Look For The Following Key Ideas In Chapter 15. A community is a group of organisms that interact in a specific place. Pelagic organisms, those that live suspended in the water, compose one of the ocean’s largest communities. CHAPTER 14 Animals of the Pelagic Environment

Pelagic Zone Summary - . pelagic zone is a three dimensional environment with no structure to provide shelter or

Open Oceans: Pelagic Ecosystems - . bacterioplankton. elements of an ecosystem approach. what are the components ? what