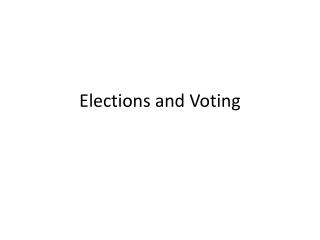 Elections and Voting. Section 1: Election Campaigns. A. Functions of Elections 1. Symbolic Reassurance: Consent is given through elections 2. Allows us to pick gov’t. 3. Allows retrospective/negative voting: get rid of poor leaders/issues.

VOTING POWER IN THE U.S. ELECTORAL COLLEGE - . note: this discussion is based on the 2000 apportionment of electoral

Should Felons have the right to vote? - . felons voting. 14 states in the u.s. do not automatically restore voting rights