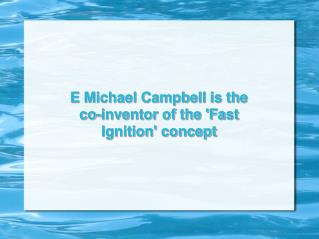 E. Michael Campbell co-invented the “fast ignition” concept and revolutionized the world of optics and photonics with his great invention.

Studies on Concept Formation - . psych 1090 lecture 2. the definition of ‘ concept ’ , like that of ‘ cognition

FemtoCell Technology - . zafer bilen senior test engineer 22 october 2008. contents. what is femtocell? what is the fmc