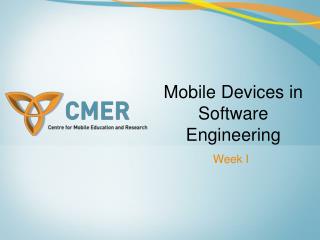 Mobile Technology and Software Engineering - . travis james, cto, cloudmetal software. state of the technology. where we

Mobile Devices in Retail - . an overview of mobile technologies at the 2014 national retail federation’s “big

Engineering Principles in Software Engineering - . five important concepts in cs that you will learn that can enhance

Mobile Devices in the classroom - . directions: as department groups, look at the different statistics on teen cell phone

Mobile devices in the Classroom - . 21 st century learners mobile devices are everywhere and kids know how to use them.