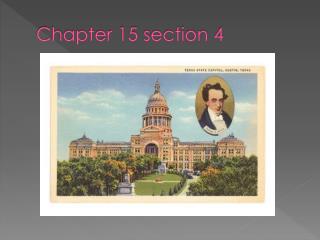 Chapter 15 section 4 . The constitution of 1876. When T exas became a state again the first thing they wanted was a new state constitution . New constitution formed in 1876. The new constitution gave the government less power, and spending power and limited governor term to 2 years Chapter 15 section 4 - . emperors and the fall of the empire. emperors of rome. an emperor is an absolute ruler

Chapter 15 Section 4 - . the catholic reformation. review. were some causes of religious dissent? what did luther’s

Chapter 4 Section 4 - . global connections. i. globalization. the process in which countries are increasingly linked to

Chapter 4, Section 4 - . security concerns. receiving lost and found items from a guest. thank the guest for giving you

Chapter 4, Section 4 - . winning the war. european allies help. volunteered. in the midst of the frozen winter at

Chapter 4 Section 4 - . independence. savannah and charles town. britain moved the war to the south because they believed