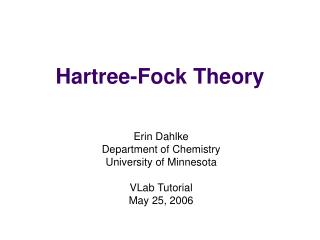 The Hartree-Fock approximation - . assume that the wavefunction can be approximated by a slater-determinant. vary the

The Hartree-Fock-Roothaan Method - . variational principle. energy of a slater determinant . where: and the hamiltonian

Atomic units - . the atomic units have been chosen such that the fundamental electron properties are all equal to one

4. One – and many electronic wave functions (multplicty) - 5. the hartree-fock method and its limitations (correlation