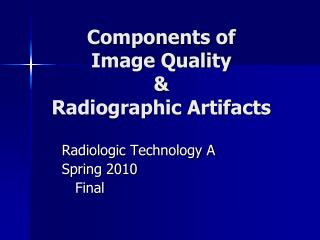 IMAGE ARTIFACTS - . what is an artifact. any irregularity on an image that is not caused by the proper shadowing of

Digital Artifacts Imaging ERRORS - Optimization of cr images. the impression that cr images can always be adjusted after

Week 4 B Chapter 14 Radiographic Film - . remnant radiation: the x-rays that interact with the x-ray film. few of the

Chapter 13 Radiographic Film - . remnant radiation: the x-rays that interact with the x-ray film. few of the original

Technical Artifacts and Errors - . chapter 11. artifacts. anything that decreases the quality of the radiograph resulting

A r t i f a c t s - . artifacts. - are echoes that appear on the image but do not have a true correspondence to an

Zen and the Art of Facial Image Quality - . terry p. riopka. overview. what is quality? – definition(s), utility and