Inside the Earth - PowerPoint PPT Presentation 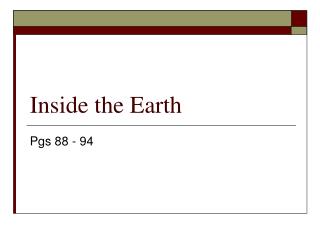 Inside the Earth . Pgs 88 - 94. What’s Inside. The Earth is not just solid rock, it is made of layers. Each layer is has its own composition and properties. These include things like element type, temperature, density and ability to flow. The Crust. Earth’s outermost layer is the crust.

Inside America's prisons - A look inside u.s. prisons, as president barack obama becomes the first sitting president to

Plate Tectonics: Earth's Plates and Continental Drift - . some questions we will answer today: how is the earth always

From the Inside Out Michael Hunter Reference Librarian Hobart and William Smith Colleges - . google from the inside out.

Inside the Earth - - more details about earth