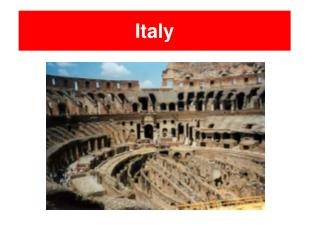 The Unification of Italy - . background. from 1100s to 1800s central europe was made up of numerous kingdoms,

Venice, Italy - . this presentation is brought to you by cindy rose. for ernst schuegraf. november 18, 2005. venice is

The Italian School System - . in italy, the constitution considers the educational system as a right for all the people.

Unit 1 The Renaissance - . the italian renaissance- why italy?. the word “renaissance” 1 st used in 1th century to