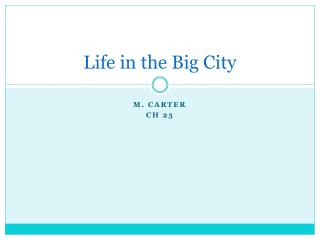 Life in the Big City Life in the Big City. M. Carter Ch 25. Immigration. 1 st wave= prior to 1870s- from England, Ireland and Northern Europe 2 nd wave= post 1870s- Southern and Eastern Europe, and Asia and Mexico in the West (until the Chinese Exclusion Act) General Push and Pull Factors:

Life in the Big City

City of Ember Chapters 1 - 20 - . review game ready….good luck!. who made the city of ember? the slaves the architects

Week 5 E.T.’s, Life, and Research - . wrapping it up!. life on our world. life on other worlds the nature of life

Diet through life - . extension. learning objectives. to recognise the different key stages in life. to understand why

Music in Sioux City: Past and Present - . by: izaiah richard buhrman-manning emerson elementary school grade 4. my