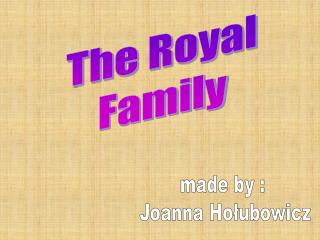 Family Planning - . ayşe arzu akalın, md. aim : the aim of this lecture is to convey general information on family

Rockefeller Family &amp; Rothschild Family: How did they get rich? - . by: delphine marini. rockefeller family: john

You Can Afford to be a Family Physician - . mark a. goedecker, m.d. york hospital family medicine residency clinical camp

FAMILY UPBRINGING - . our family. the family is the basic social unit in most societes. ideally, it provides its members

How modern society disconnects us from our youth, and what we must do about it Conversations at the Royal, Thu, Mar 21,

THE ROYAL STANDARD of Ur - . this object was found by sir leonard wooley in one of the largest graves (pg 779) in the