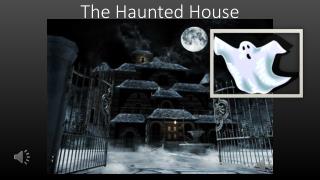 The Haunted House. The moon was covered by clouds. Owls were hooting in the distance. It was Halloween. Will and Kate were doing like other kids do on the 31 st of October, trick or treating. “La ,La ,La , La” Kate sang as she went along. The Haunted House… - . (cue the scary music). by melissa haynes. you see a dark house as you are walking home one

The Haunted House - . ghosts live inside this house. can you find the ghosts that are in the bedroom? there is a

The Haunted House - . by stephen kennedy. chapter 1 the

Haunted house - On halloween like leaves we scatter witches and goblins and black cats chatter up a lawn, down a lane,

THE HAUNTED HOUSE OF SECRETS - . by ariz and

The Mystery of the Haunted House - . by paul channel 3 rd

Haunted house of Hell - . by hannah and macey. click

Dare you enter the haunted house? - . inside you can find pumpkins for your hallowe’en party. but ghastly horrors also

The Girl in the Haunted House - Outline - . ms. nelson’s beginning drama class. once upon a time there was…. a girl