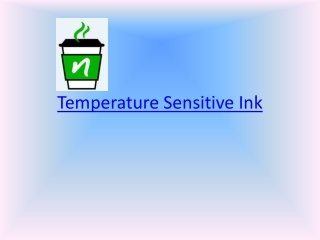 We designed a marker with temperature or heat sensitive ink, designed to let you visually see when your drink is hot or cooling down. Processes sensitive to Operating temperature - . he3 transport by diffusion he3 evaporation geometrc phase he3 t2.

INK - . who invented/discovered it?. a chinese man named tien-lcheu was then discovered in egypt and brought to the

Ink Insertion - . general. ink is first inserted after the tj8300 has been fully assembled and all the electrical and

Ink Analysis - . introduction to ink analysis. although all blue or black inks may look the same, there can be some

Ink Drawing - In order to shade in ink, there has to be a repetitive stroke of some kind and the distance between these