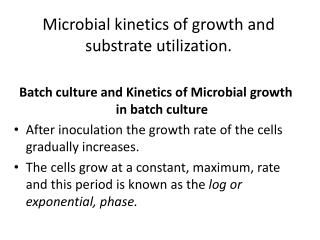 Microbial kinetics of growth and substrate utilization. Batch culture and Kinetics of Microbial growth in batch culture After inoculation the growth rate of the cells gradually increases. The cells grow at a constant, maximum, rate and this period is known as the log or exponential, phase.

Activated Sludge Processes - . ce - 370. basic process. the basic as process consists of a reactor in which the

Monod equation - . monod equation is a kinetic model which describes microbial growth as a functional relationship