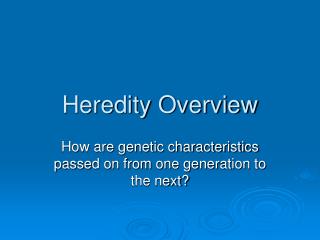 Heredity Overview. How are genetic characteristics passed on from one generation to the next?. Cell Division. Chromosomes Contains the genetic information that is passed on (made of DNA) Hominids = 46 chromosomes (23 pairs) Mitosis Body (“somatic”) cells  replaces damaged cells Meiosis

Unit 6 - Genetics Introduction - . you look the way you do because of the genes your parents passed on to you at

B-4 Demonstrate an understanding of the molecular basis of heredity - . genetics review. b 4.1 compare dna and rna in

1. Overview: Drawing from the Deck of Genes - . what genetic principles account for the passing of traits from parents to

Cells &amp; Heredity - . human inheritance chapter 4 section 1. the organism either expresses the trait or they

Chromosomes &amp; Heredity - . chromosome theory of heredity genes are located on the chromosomes each gene occupies

Heredity - . review of traits. a trait is a characteristic of something traits can be both behavioral or physical.

Genetics Review (Basic) - . 1. what is the molecule that carries all the information about how a living thing will look

Genetics Review - . gregor mendel is known as: a. father of biology b. father of genetics c. father of dna d. father of

Chapter 5-1 Genetics - . heredity. is the passing of traits from the parents to the offspring and is controlled by genes.