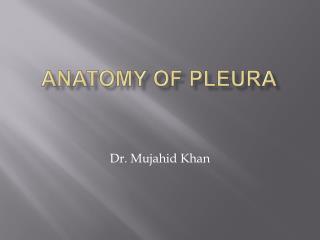 ANATOMY OF PLEURA. Dr. Mujahid Khan. Location. The pleurae and lungs lie on either side of the mediastinum within the chest cavity Each pleura has two parts: Parietal layer Visceral layer. Parietal Layer. It lines the thoracic wall

BIOL 197L – Lab #7: INVERTEBRATE DIVERSITY AND ANATOMY I - . which phyla did we study in class? and what genera

RADIOLOGICAL EXAMINATION OF THE LUNG AND PLEURA - . department of oncology and radiology prepared by