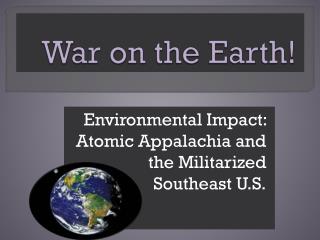 War on the Earth!. Environmental Impact: Atomic Appalachia and the Militarized Southeast U.S. The Military Industrial Complex. Military, Global Corporate & US Government. “The problem in defense …. Plate Tectonics: Earth's Plates and Continental Drift - . some questions we will answer today: how is the earth always

Crust - . outermost layer or shell of the earth crust represents less than 0.1% of the earth's total volume. mantle. the