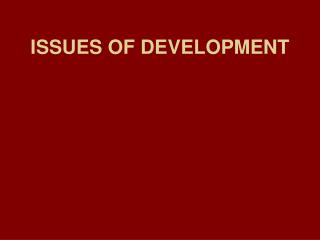 ISSUES OF DEVELOPMENT. What follows tend to apply to most LEDCs, but not to all. Access to Food. Enough grain is produced to feed everyone more than 3000 calories a day. MEDCs dump food rather than sell it for a price that is too low.

Why is health a crucial issue for development and poverty reduction? - Health insurance for the poor in developing

Systems for E-Business - . integration and optimization on the web. major issues. majority of organizations are faced