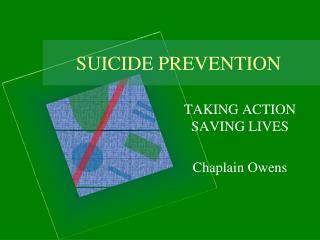 SUICIDE PREVENTION. TAKING ACTION SAVING LIVES Chaplain Owens. Suicide : A Serious Public Health Threat. A National Problem – 30,000 per yr A Military Problem – about 200 per yr in the Military Services For over 10 years