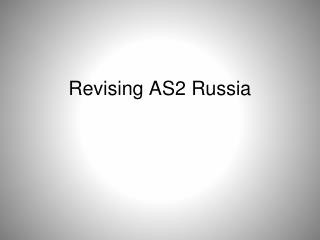 Revising AS2 Russia. Using your time in the exam. There are 4 questions to choose from You only do two of the four You must do the a) and b) parts for the question you choose Question a) = 8 marks (10 minutes) Question b) = 22 marks (30 minutes) Russia – is the biggest country in the world - . in the north russia is washed by the arctic ocean in the south – by

Investments and Finance in Russia - . dr. ivan darushin the department of credit theory and financial management

A presentation to the System Operator for the Unified Energy System of Russia Moscow, Russia September 2007 - Managing

Russia and the Eurasian Republics - . 1.1 physical geography. russia and the eurasia republics make up 1/6 th of the land