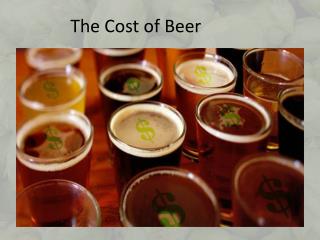 The Cost of Beer The Cost of Beer. History. Beer was first created in 7000 BC The first beer recipe found was from about 3000 BC Women were mainly the brewers Beer was medicine Used for the journey to the hereafter Noah had beer It was a currency Hops – A great preservative. History.

The Cost of Beer

The Beer - Lambert Law - A comparison of volcanic so 2 emissions from bezymianny, shiveluch, and mount st. helens

THE BEER GAME - . the board. start-up. pick a name for your team’s beer. decide which team members will play the

The Art of Beer Brewing - . why beer brewing? it is a fun and safe hobby that fun and not costly is an educational

The Beer Game - . simulates the flow of beer through a simple supply chain—retailer, wholesaler, distributor,

Beer - . helping ugly people to find the parter of their dreams since the third swig just drink it

Types of Beer - . ales. top fermentation yeasts oldest of the two types of ber can be traced back more than 5000 years

The Beer Store - . a strategic plan for social media in 2011 – erin scott. goals. make the beer store the ultimate

Beer: Future of the Additives Market. - The collection

THE BEER GAME DEBRIEFING - . the blame game. how did you feel?. who did you blame?. summary of each team’s orders,