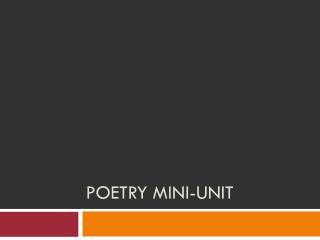 A2 English Unit 4 Poetry – Carol Ann Duffy - . oslo. oslo. the title is the name of a real place. it is the subject of,

Poetry Mini-Unit - . terms to know…. stanza - a collections of lines in a poem, like paragraphs in poetry rhyme scheme

Write a Self-portrait Poem - . objectives : to generate similes and metaphors that represent various aspects of your

Poetry Lesson - . by poland. what is important to us

Learning about Poetry - Feelings about words by mary o’ neill. learning about poetry. some words clink as ice in drink.

Poetry Comparison - . days 101-105 2 nd mini lesson. connection. we have learned how to analyze a series of stanzas in a

The Elements of Poetry - . painting with words by sharon white. how to read poetry. follow these guidelines read the poem

Mini lesson Summarize Poems — 5th grade - . connection. we have learned how to analyze text to determine themes or life